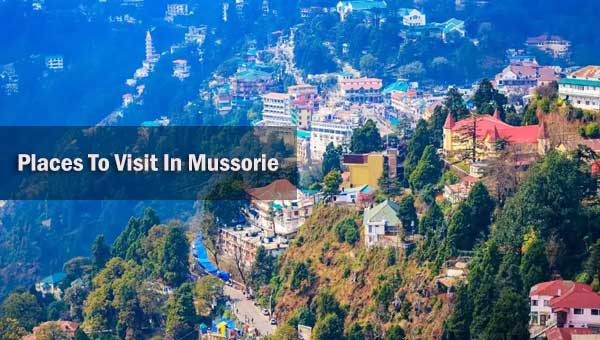 Mussoorie is a hill station situated in the Dehradun district of Uttarakhand, India. Mussoorie is best known for its tourism. The Government of Uttarakhand has been working actively to keep the tourist places to visit in Mussoorie intact and helping in developing a safe and clean place to travel. Mussoorie is situated in northern India that is surrounded by Himalayan snow ranges in the north east and the Doon Valley and Shiwalik ranges in the South. It is situated at the altitude of 2,005 Metres (6,578 ft).

The place is famous for its mesmerising waterfalls, sunrise & sunsets, and mountain ranges. If one wishes to visit tourist places in Mussoorie can opt for winter rather than summer. Add a list of places to your trip to Mussoorie which will help you attain the heavenly experience in the holy land. Starting from the Kempty WaterFalls, situated in Ram Gaon, Tehri Garhwal District. This is a must visit place for tourists on a trip to Mussoorie. At Kempty Waterfalls one will experience the beauty of nature and can do a list of activities such as sightseeing, picnic, cable car ride, and shower under a waterfall. The place is famous for its milky streams of water. Bhatta falls is a complete picnic with a small pond and a mesmerising waterfall. One can take a ropeway from Bhatta village to reach the natural paradise.

Lal Tibba is the highest viewpoint in Mussoorie, it is very close from the city centre and one of the best places to visit in Mussoorie. It is clearly defined by its name which means Red Hills, that gives a clear image of sky during sunrise and sunset. Gun Hill Point is the second largest viewpoint which is easily accessible from mall road and one can reach there after a short 20 min trek and can have a 360 view of the town from the Doon Valley. George Everest Peak is better known as Park Estate and named after Sir George Everest. Here one can visit his house, observatory, and laboratory and have some interesting insights about the life of Sir George Everest.

Robbers cave is situated near Anarwala Village near Dehradun District. It is one of the least interacted tourist places in Mussoorie but it is very popular among youngsters. One can take a narrow creek going through 2 huge rocks with a cool stream of flowing water. One must carry their own food and beverages at the picnic spot as all the destinations are on higher altitudes. Also keep one thing in mind to to litter around and dump them in the dustbin and help the Uttarakhand Government to maintain the peace and cleanliness in the Heart of Mountains and waterfalls.

kemfallsPlaces to visit during trip to Mussoorie01.12.2023