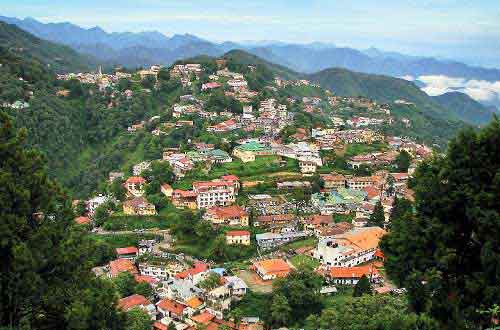 Mussoorie is a hill station in the state of Uttarakhand. It is one of the most impressive hill stations in the northern India. Mussoorie is located in the Garhwali Himalayas. It is located about 35 km from the state capital of Dehradun and 290 km north from the national capital of New Delhi. Mussoorie is also not far away from Hindu pilgrimage destinations like Kedarnath, Badrinath, Gangotri, Yamunotri, Haridwar and Rishikesh.The Mussoorie hill town  sits at an average elevation of 1,880 meters above sea level. Mussoorie was founded by British army officer named Captain Young. Uttarakhand tourism offers many mussoorie tourist places for tourists.

It is one of the beautiful waterfall in Mussoorie. The Kempty Falls Mussoorie is a part of the terrain of Himalayas. Here ,water cascades down from a height of 40 feet. It is placed at about 1,364 metres above sea level.The Kempty is a cozy and yet open for natural bath with a waterfall originating somewhere in the Himalayan glaciers. The Kempty Falls is usually surrounded by tourists.

Bhatta Falls in the village of Bhatta are seven kilometers from Mussoorie. Bhatta Falls are a set of waterfalls and a popular picnic spot . It has natural stream of water flowing down the hills.There is a pond that gets fresh water from the waterfall and is open for tourists to swim and bath.

This fall is surrounded by a dense forest. Mossy Falls is a horse tail waterfall. Mossy Fall of Mussoorie is a ideal spot for picnic. Mossy Rock Falls consists of 6 tiers of cascade and slide type waterfalls.

Mussoorie lake is a newly picnic spot developed by Mussoorie Dehradun Development Authority on the Dehradun-Mussoorie road. It offers a view of Doon Valley and nearby villages.

The Mall Road has plenty of shops and showrooms offering everything from gift items to garments, hand-made souvenirs and antiques. Apart from this, The christ church is positioned above the mall road among lush green trees and misty mountains.